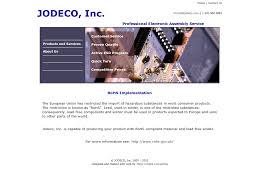 The European Union has restricted the import of hazardous substances in most consumer products. The restriction is known as “RoHS”. Lead, used in solder, is one of the restricted substances. Consequently, lead-free components and solder must be used in products exported to Europe and soon to other parts of the world.

Jodeco, Inc. is capable of producing your product with RoHS compliant material and lead-free solder.

ohn Cochran purchased a small electronic assembly company in 1999 and changed it’s name to JODECO. The name comes from his and his wife’s names.

Paul Drahn became the operating partner in 2000. The owners have put all profits into developing the company capability. When John passed away in 2004, Paul became the President and owner.

While staying at the same location,JODECO has grown from a single customer to more that 18 customers. JODECO serves both the Central Oregon and the Portland Metro areas. A list of existing customers is available upon request.

The JODECO 6000 square foot plant is located near the Redmond, OR regional airport, Roberts Field. Daily package service is provided by the three major delivery companies. JODECO will make emergency local pick-up and delivery when necessary.

Sorry, no records were found. Please adjust your search criteria and try again.

Find awesome listings near you!